The design and development of the new uniforms has been a whole-of-community project.

Lajamanu School Principal Juliette Coco said the initial idea for the new uniforms had come from local Aboriginal staff at the school, who then worked with community elders on the design to make sure they were culturally appropriate.

“They worked with community elders to find out what pictures and symbols were needed. The designs are part of the dreaming stories that belong to each of the groups and all have the animal totem for that group on them,’’ she said.

The yellow design features the eagle, the green uniform the goanna, the blue uniform has an emu and the red design has a kangaroo.

Ms Coco said once elders had approved the design concept and symbols, local artist Gerald Watson, painted the t-shirt designs on canvas before they were sent to a designer, who digitised them into files ready for printing.

“It’s been a real team effort and they look fantastic. The kids love them and they feel really proud,’’ she said.

Lajamanu School student Shontelle, aged 12 said: “Our shirts are in our skin group’s colours which is really good. I'm Napaljarri which is yellow and we have our dreaming story on our shirts and mine is an eagle.”

While Kamus, who is 14 said:  “We recently got our new school shirts and I really like them. I wear green which represents my skin group and my name is Japanangka. On the shirt I have my skin group’s dreaming story of the goanna. We look very good and we are proud of wearing them.”

The uniforms were released to coincide with school photos and a middle year’s school excursion to Cairns.

“Everyone in the community wants one, but you have to be a teacher or student to get one,’’ Ms Coco said.

“The students have even come up with some great excuses of why they have lost their shirts, so they can get an extra one.’’ 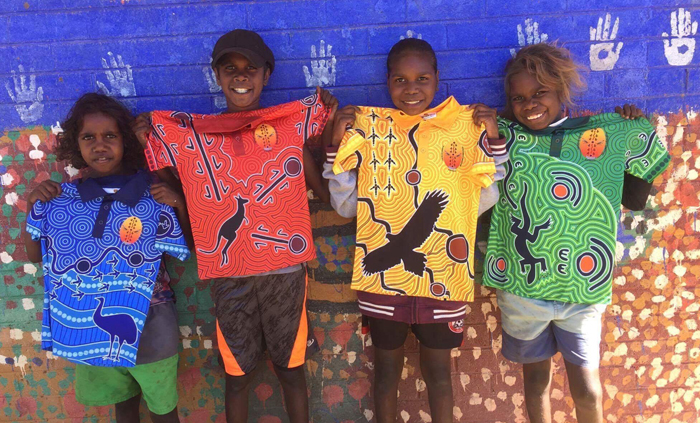