“Primary school was pretty easy for me – it was usually As and Bs on my report card,” he said.

Zhuang Zhuang said the award was a surprise but he was proud to receive it.

“It gives me a lot of confidence coming into a new school,” he said. “It was really shocking when I found out (about the award) – my parents were very excited.”

The top performer said Larrakeyah Primary School staff had been a strong influence on his education. “My teachers, and everyone at Larrakeyah, were all excellent,” he said.

Crediting science as his favourite subject, Zhuang Zhuang has cited engineering as a future career.

But his favourite part of primary school was being able to use the new Year 6 classrooms.

With two weeks under his belt at The Essington School, Zhuang Zhuang says the amount of homework has been a surprise.

“We didn’t get any homework at Larrakeyah – I get a lot less free time,” he said.

At Larrakeyah Primary School, the former Year 6 student achieved the highest score in the 2017 Cambridge Primary Checkpoint Exam in English. 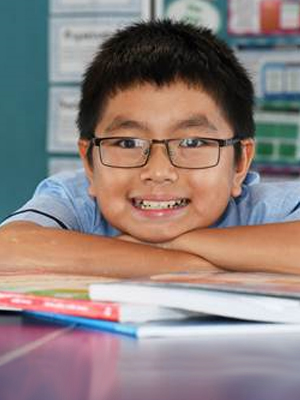