Welcome to 2020's first edition of EngageMeNT, a regular newsletter showcasing the achievements and milestones arising from the work of the Engagement and Partnerships Division of the Northern Territory Education Department.

The division kicked off the year with its fourth staff conference - a chance to re-group and re-set for the year ahead. Themed "Strategic Partnerships", the conference promoted innovative culture building and explored different ways of harnessing and engaging talent in the workplace.

In the Office of the General Manager we’re well on track with our service delivery tracking system. We’re continuing to lead the agency with our Aboriginal staff representation, with 31.9% of our workforce identifying as Aboriginal or Torres Strait Islander.

Transition Support Unit continues to support over 400 students from 70 communities, demonstrating how wide our reach is.

In light of what we’ve learnt over our first 18 months of operation, we have formulated a new Strategic Partnerships area that links Indigenous Education Strategic, Community Engagement and Engagement programs into a functional team. We welcome Alf Leonardi to head up that team.

Our Student Engagement team had led our work to re-engage over 400 students who were chronically disengaged, meaning that even in a time of declining population in the territory our government school numbers have held firm. 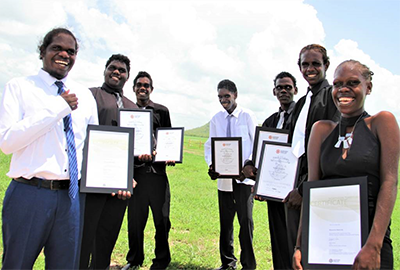 Aboriginal high school graduates from western Arnhem Land have been enshrined as heroes and role models for younger students.

The achievements of eight Year 12 completers were celebrated during a graduation ceremony at Gunbalanya – located on picturesque floodplain country about 300 kilometres west of Darwin.

Traditional Bininj song and dance marked the occasion, attended by parents, families and more than 100 wide-eyed primary and secondary students all keen to honour the high achievers.

“Those kids that complete Year 12 become heroes and when you can sustain the heroes and it becomes the expectation that students graduate from Year 12,” Tony Considine, General Manager of Engagements and Partnerships, Northern Territory Department of Education said.

Completing secondary schooling in a community which is cut off by road for a large chunk of Wet Season is no mean feat.

Two of the graduates have achieved their Northern Territory Certificate of Education, while six students took the Employment Pathways route to Year 12 completion.

“It’s a genuine credential and it will have clear indications in their portfolio on what units of work and what units of study they have successfully completed so all that information is there,” Mr Considine said.

“There’s also a component related to culture and place which the community drives. That keeps it connected and keeps community involved in what they do.”

Staceyanne Nawirridj has secured a youth worker position in Gunbalanya – largely thanks to the Certificate 3 Community Services qualification she obtained while at school.

Leonardo Nabulwad will work at the school and aspires to become a qualified teacher, while Byron Girrabul is employed at the local meatworks – butchering beef and buffalo to be sold in Arnhem Land communities.

Producing eight high school graduates in one year is an amazing achievement for a school which didn’t even offer secondary schooling until 2012.

Gunbalanya’s school board drove the creation of a modified school calendar – which recognises and works around the community’s cultural commitments.

“It’s building on the strength of their identity because if we don’t start with identity, place, language and culture then the connectedness and the relevance is not there,” NT Department of Education Chief Executive Vicki Baylis said.

“If learning is not built around who I am and my community and my connection then it’s pointless and then what you get is disengagement.” 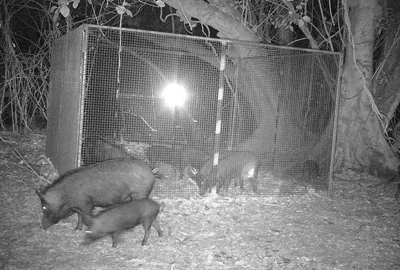 Research being undertaken by students at Maningrida College will be used to help land managers better understand the movements of problematic porcine populations into the future.

Learning on Country (LoC) students have been constructing metal pig traps and experimenting with a variety of baits. Once trapped, feral pigs are fitted with electronic monitoring collars, allowing students to track and observe their movements.

But enticing seemingly suspicious swines into traps proved to be a process of trial and error.

Pigs turned their snouts up when a mixture of corn and molasses was presented as bait, while trials using jackfruit to entice the hungry hams also produced sporadic results.

But soon after the budding researchers made a ground-breaking discovery about the greedy grunters – it seems pigs love figs.

“During consultations with senior traditional owners we followed pig tracks into a small patch of thick bush that clearly had signs of large numbers of pig migrations,” Alex Ernst, Maningrida LoC Coordinator said.

“The following week we set up an animal trap camera with a pile of figs on the ground and every night pigs would come in to eat the fruit of the fig tree. This was a breakthrough in our experiment so we deployed a new pig trap the following week.”

Students even developed their own cyber-tracker application to record and store data which was fed back via email from fitted tracking collars provided by scientists at the Commonwealth Scientific and Industrial Research Organisation (CSIRO).

The students’ findings would be used by local Aboriginal rangers to reduce numbers of pest porkers.

“The rangers will be able to incorporate this data into their aerial and ground operations. By being able to track the collars it means they (rangers) can spend less time searching for pigs and more time culling.

“Other ranger groups have already started using some of our techniques with great success and a lot of our data from the project will be published by CSIRO to help farmers manage feral pigs into the future.”

Benefits from the research project are multi-layered.

Traditional owners are paid for the knowledge they impart, while helping to inspire and upskill the next generation of local Aboriginal rangers.

“It has been a fantastic way to develop an interest in science, particularly among our female students.”

Maningrida College’s Learning on Country program is a culturally-relevant school-based partnership between the school, Department of Education, Bawinanga Aboriginal Corporation and Northern Land Council. It assists Aboriginal students to develop skills, knowledge and confidence on a pathway to employment with Aboriginal ranger groups or other local industries. 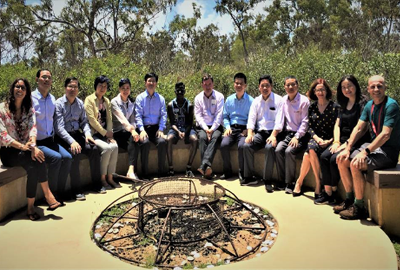 A delegation of Chinese educators has been given an insight into remote schooling in the Northern Territory.

The visit left a lasting impression on the high-level Anhui delegation, which included senior bureaucrats and principals from universities and schools.

“I deeply felt the schools’ long-term efforts in bilingual education and their close work with the community, which benefit the students and families in the remote area,” Mr Shuguang Shao, Director of Basic Education, Anhui Provincial Department of Education said.

Visits to Taminmin College and Nightcliff Primary School provided an opportunity to build on and strengthen established sister-school relationships.

“The exchange of ideas, expertise and new friendships that we gain through the annual forum and also our sister-school partnerships benefit both Anhui and Northern Territory educators and, importantly, the children in our schools.” 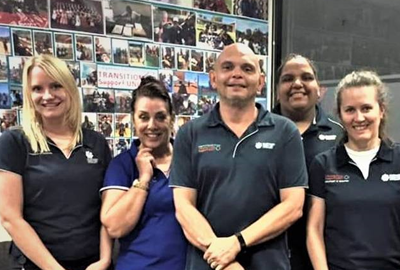 Brenton was recently named AFL-NT’s Manager of Talent, a role he’ll take up when he finishes work at TSU later this month. He’ll be responsible for nurturing the brightest young footballers from across the Territory with a view to increasing the number of local players on AFL and AFL-W lists.

“I’m going into a job that will see me get paid for doing things that I probably already do in my free time so it’s something that I’m passionate about and I love,” he said.

Senior coaching stints at three Northern Territory Football League clubs helped Brenton build his football resume but he says working at TSU, leading a staff of 25 and working with students from 70 bush communities would also help guide him in his new role.

“Prior to working here I didn’t really have a deep enough understanding of the social and emotional preparedness that young people need to have to transition successfully to other environments,” Brenton said.

“For our most talented kids a lot of their options and opportunities will be via boarding schools down south so a lot of the kids that I’ll be seeing in my new jobs will be on similar pathways to the kids that we’re working with here now at TSU.

“If there’s kids that are living remote or very remote that have got talent that need to transition into an urban setting we need to do the work in the year leading up to the transition and make sure that they’ve got the social and emotional capability so they can move into the next stage of their journey.”

Seeing young men and women grow confidence and self-belief in often challenging situations was a highlight of Brenton’s time at TSU.

“Just to be able to see somebody come in at the very beginning in year 6 and make their way right through and still be really enjoying their schooling it gives you a good feeling that the work that we’re doing is good and suits these kids here.” 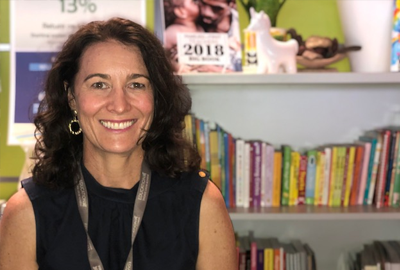 There's a new addition to the Families as First Teachers (FaFT) team with veteran educator Amanda Docksey taking on the role of Senior Child Development Consultant.

Boasting more than fifteen years in the classroom, Amanda has spent the past four years working as Assistant Director, Quality Education and Care.

Her new role will support FaFT programs to increase the numbers of ASQ-TRAK assessments being undertaken and work with FaFT staff to increase understanding of early childhood development.

ASQ-TRAK is a Foundations project under the Northern Territory Government’s Indigenous Education Strategy (IES) 2015-2024. It is a strengths based developmental screening tool which has been culturally adapted for use in Aboriginal communities to assess a child’s overall development.

ASQ-TRAK assessments are currently being delivered at 76 per cent of remote FaFT sites in the Northern Territory.

“It is a humbling opportunity to play a part in improving lifelong education, health and wellbeing outcomes for young Aboriginal children and their families," Amanda said.

“I hope to build strong relationships with educators and families to support the implementation of ASQ-TRAK so that all eligible children are developmentally screened, and receive the support they need to grow and learn.

“I hope to influence the knowledge and understanding of child development and its application to learning.”

Away from work Amanda spreads her time between family and friends and researching renovation ideas and tempting travel destinations.

URL copied!
Back to top
URL: https://education.nt.gov.au/publications/engageme-nt/engagement-issue-2 26 September 2022, 9:52 am