Welcome to the 19th edition of the Indigenous Education Strategy newsletter highlighting recent news from Arnhem Land including the Garma Festival where local and interstate students from Yirrkala, Nhulunbuy, Elcho Island, Ntaria, Queensland and Western Australia came together to share their knowledge and experiences with fellow students.

During what is always a spectacular celebration of Yolngu culture, I had the privilege of engaging with students, families, community members and our partners who generously shared their views and ideas for the future of remote education in the Northern Territory.

I also enjoyed hearing the many speakers including our own Senior Teacher Cameron Adams who, together with Yothu Yindi Foundation’s Peter Solly, introduced the new Foundational Learning program for students aged 14-17 living in Arnhem Land.

Finally, thank you to everyone who took the time to visit the NT Department of Education stall over the busy four day event and to those who helped make the youth forums so engaging, including our dedicated staff and students. 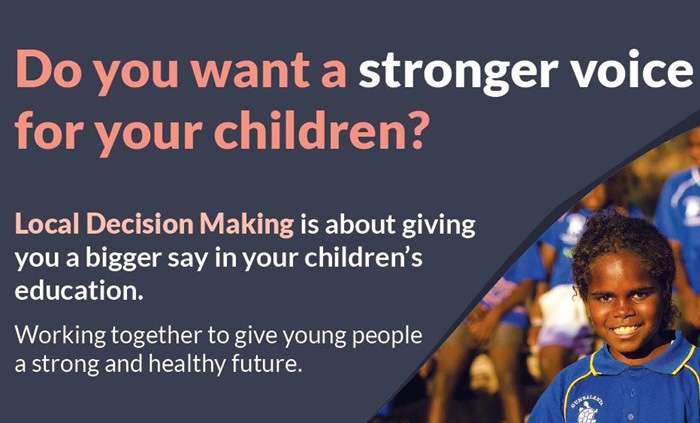 Dhupuma Foundational Learning is the realisation of a long-held dream by Yolngu elders and is being delivered in partnership by cultural leaders, the Yothu Yindi Foundation (YYF) and the Department of Education.

The program delivers a unique curriculum for local students at risk of becoming disconnected from traditional education settings.

Senior Teacher Cameron Adams is implementing the learning program designed to engage the students and prepare them for employment.

“My role is to work closely with the students on a day to day basis to engage them through purposeful and flexible learning experiences that motivate and challenge them,” he said.

“The partnership with the Yothu Yindi Foundation has been integral in creating a holistic, culturally appropriate and responsive learning environment to help transition them into employment or further study.”

Recently, a group of foundational learning students had the opportunity to showcase the depth of their cultural knowledge, helping run traditional healing ceremonies called Raypirri, meaning respect and self-discipline, together with Miwatj Health Aboriginal Corporation at Garma.

In June the students ran cultural tours for a group of Melbourne Girls Grammar School students, collecting seeds, bark, and reeds while sharing their knowledge of country and cultural traditions that have been passed down for many generations.

YYF chairman and Gumatj leader Dr Galarrwuy Yunupingu said the Dhupuma Foundational Learning program was the culmination of many years of hard work by Yolngu leaders.

“Education is at the heart of everything we do, and the creation of a special program for education and culture in northeast Arnhem Land has been a vision of the YYF since its inception in the 1990s,” he said.

“The program weaves together an education in Yolngu cultural traditions along with a more mainstream curriculum that emphasises things like literacy and numeracy skills.’’

The Dhupuma Foundational Learning program is for young people aged between 14 and 17 years.

Dhupuma means looking up and ahead. 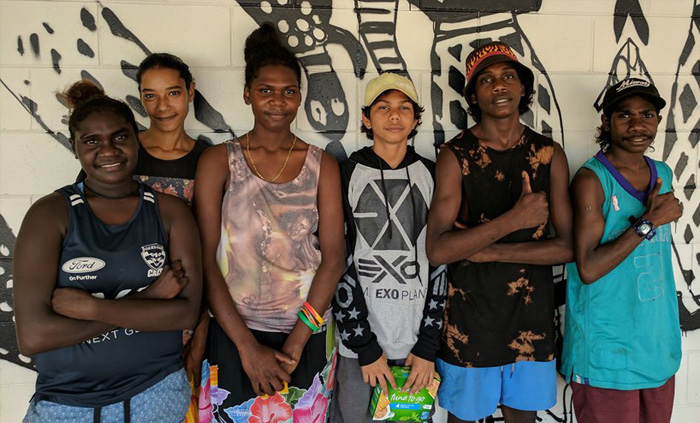 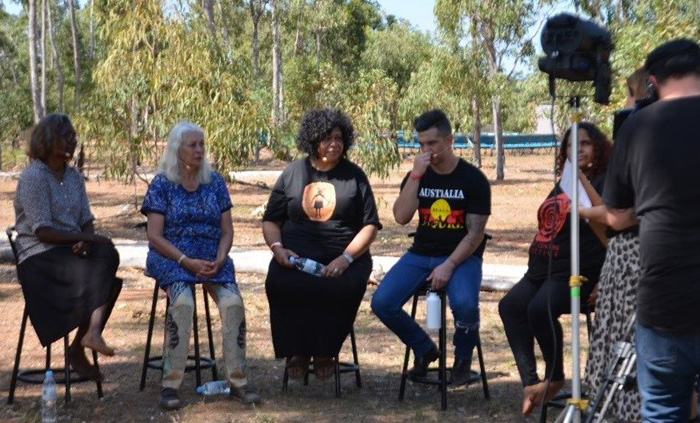 Kyaciah and her daughter Azelea enjoyed the shade and company of other parents at the Families as First Teachers (FaFT) play space at the Garma Festival.

Kyaciah attended FaFT for the first time when Azelea was just three weeks old. She said it was a great way to meet other Mum’s especially since she had just returned home to Arnhem Land after living in Adelaide.

“I’ve just returned from Adelaide where I’ve been living for the last 12 months,” she said.

“I came back because I miss this place; the seafood, the water, the hunting and the people.”

FaFT is an early childhood program for children aged from birth to four years and their families. It uses play based experiences and activities to increase a child’s development while working with parents to build capacity.

“We sing songs and do different activities. We cook for our kids and swap recipes and ideas.”

The FaFT play space at the Garma Festival was popular with babies and toddlers, mothers and fathers, aunties and grandmothers who made the most of the interactive learning opportunities on offer, playing games, singing songs and making clay animals together.

Families as First Teachers operates across 38 sites in the Northern Territory. 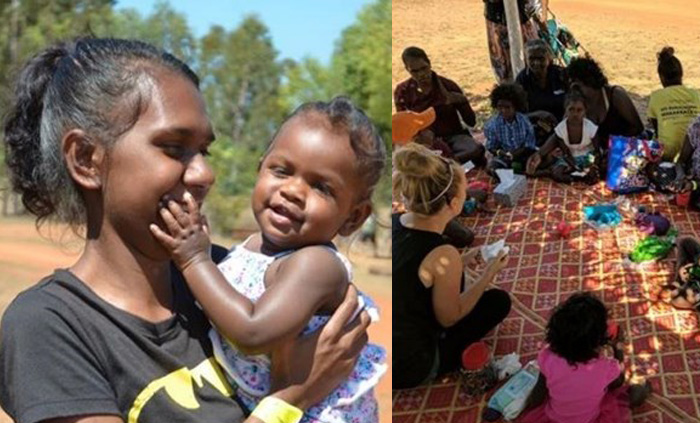 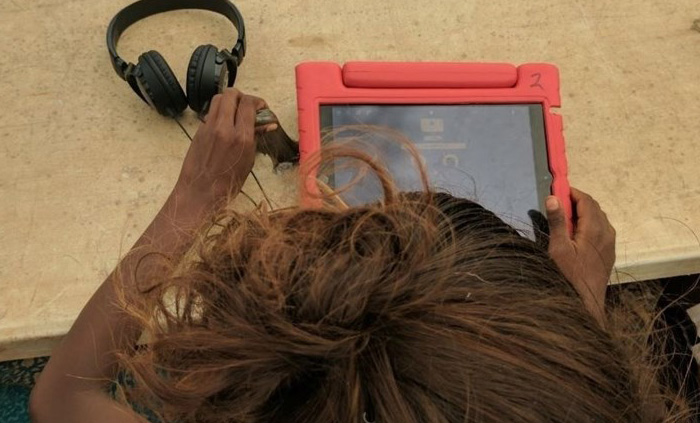 The project - Gurrutu'mi Mala Wungili - Family on Country Portrait Project – is an initiative of the Yirrkala Families as First Teachers (FaFT) program and showcases the communities pride in country culture and family.

“During the portrait sessions, stories were told and precious memories were shared,” she said.

“We walked on ground where babies were birthed, where young people fell in love, and where people lived before a mission, a mine and a town came to change life and Country forever.

“We saw tears fall – for people and ways of the past that are now gone, but also tears of pride and love for babies in arms that are the future.”

Yirrkala School Council Chairperson and Senior Yolngu woman Yananymul Mununggurr, said that for her the exhibition was about the strong connection between family and country and the deep love that Yolngu parents have for their children.

“We had to choose a particular place we knew. For my family, it was at Shady Beach because we have connections to Shady Beach; it was my mother’s country,” she said.

“Family coming together on country. I think that’s the story these pictures tell.” 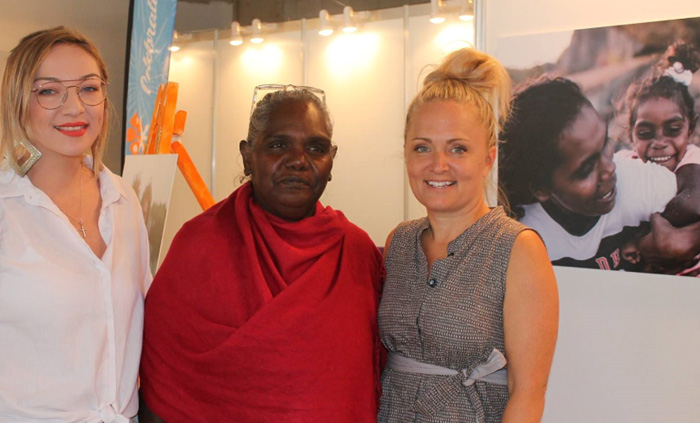 Winston Lami Lami from Warruwi was one of several Year 8 students who led the tours, showcasing the modern facilities and sharing details of daily life at the school.

“I was a bit nervous to begin with, but I talked about the things I enjoy most about living here, like spending lots of time with my friends and playing sport after school,” he said.

“I can also fly home to see my family whenever I need to because it’s not too far away.”

The students cooked damper and freshly caught fish on an open fire pit, displaying their culinary skills and some of the region’s finest local produce.

Dawurr was designed to provide students and families living in remote Arnhem Land communities with a secondary school option closer to home.

The multi-million dollar boarding facility began operating in 2017, and houses up to 40 students in one, two and four student bedrooms. 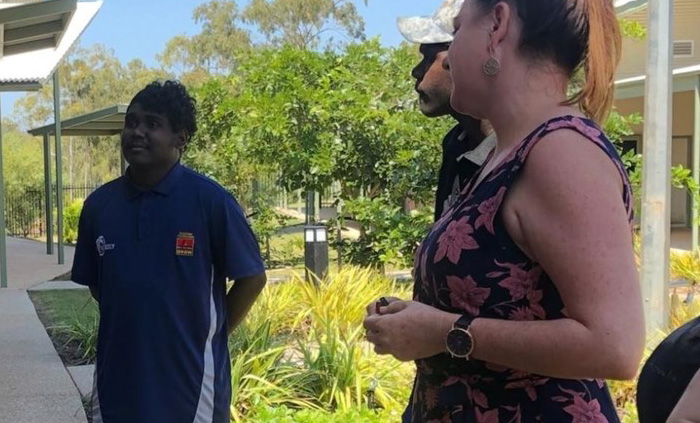