Shakespearean aficionado Rhyan Lee has been chosen for a John Bell Scholarship after successfully competing with 120 hopefuls from across Australia.

The Darwin High School graduate will join two other thespians for five days at Bell Shakespeare, the Sydney-based national theatre company specialising in the works of The Bard.

The coveted week-long training includes master classes, observations of rehearsals and live theatre, and a performance of a monologue for John Bell, artistic director Peter Evans, and Bell Shakespeare staff. The awardees will also be asked to prepare Romeo’s balcony soliloquy.

He jests at scars that never felt a wound.

JULIET appears above at a window

But, soft! what light through yonder window breaks?
It is the east, and Juliet is the sun.
Arise, fair sun, and kill the envious moon,
Who is already sick and pale with grief,
That thou her maid art far more fair than she:
Be not her maid, since she is envious;
Her vestal livery is but sick and green
And none but fools do wear it; cast it off.
It is my lady, O, it is my love!
O, that she knew she were!
She speaks yet she says nothing: what of that?
Her eye discourses; I will answer it.
I am too bold, 'tis not to me she speaks:
Two of the fairest stars in all the heaven,
Having some business, do entreat her eyes
To twinkle in their spheres till they return.
What if her eyes were there, they in her head?
The brightness of her cheek would shame those stars,
As daylight doth a lamp; her eyes in heaven
Would through the airy region stream so bright
That birds would sing and think it were not night.
See, how she leans her cheek upon her hand!
O, that I were a glove upon that hand,
That I might touch that cheek! 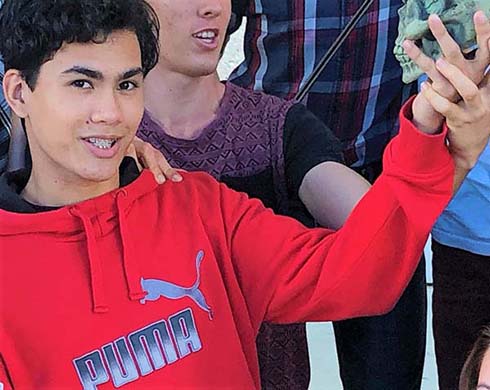