NTMS Regional Music Coordinator for the Alice Springs and Barkly Region, Nicole Quesnel, said playing as a collective significantly advances the performance skills of the musicians, “helping them feel part of a broad musical community and appreciate a much fuller sound”.

“Alice Play Day allows students to advance their performance skills and ability to follow a conductor, improves performer etiquette, and fosters their ability to engage an audience,” she said.

“We’ll have more students participating this year, including those with a broader understanding of music who can mentor newer, less experienced students.

“Students are given copies of the music a few weeks before music workshops to focus on the more challenging parts. The arrangements are adapted by teachers to ensure students of all skill levels can participate.

“Separate workshops, with students rehearsing in one of two ensemble groups — guitarists in one group, and winds with percussion instruments in the other group — will precede a concert for Alice Springs students, parents and friends.”

Mrs Quesnel said for many students the Alice Play Day will be the first time they are part of an ensemble larger than two to six students.

“There is no greater joy in music than being part of a large collective and performing in time and harmony,” she said.

"The instrumentalists will work in sections during two rehearsals and then present the concert as a group. Because this event ends with a performance it provides students with an opportunity to share their pride in what they’ve accomplished.”

Rehearsals begin at 9am. A concert will be held at the Centralian Middle School hall starting at 12.30pm. 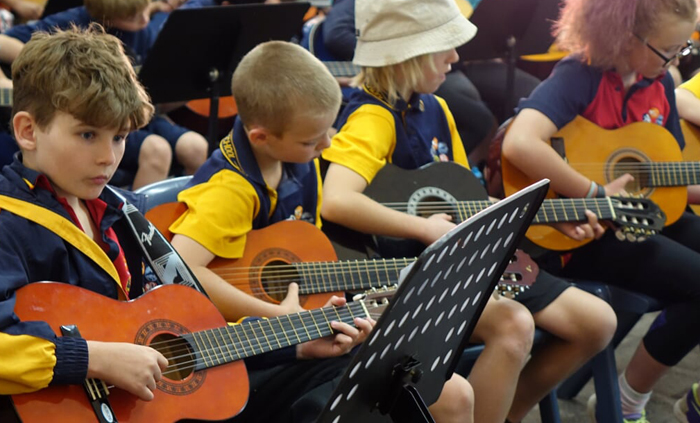