A pilot implemented across the early years in the NT has seen student attendance, engagement and parent input at Bradshaw Primary School skyrocket.

The Age Appropriate Pedagogies (AAP) pilot program was trialled in nine schools across the Territory in Semester 2 and uses an engaged, learner-focused teaching approach to support students in the early years of school to be successful learners.

Jaz Ferguson, a Transition teacher at Bradshaw Primary School, said her school’s research based project was focused on improving the early literacy results of Indigenous students through FELA testing.

“Our school has about 530 students and about 40 per cent of them are Indigenous,’’ she said.

“We were really interested to see how a child-led and interest-based approach to teaching would improve student attendance, retention, engagement and achievement in early language and literacy skills.’’

Ms Ferguson said AAP had achieved outstanding results in her Transition class, with one year of student-growth and knowledge achieved in 10 weeks.

“Our FELA data showed that students had grown 36 points in 10 weeks. What that means is that our students’ literacy improved by a whole year’s worth of learning in 10 weeks,’’ she said.

“It also worked to close the gap in school attendance in 10 weeks, with Indigenous student attendance rates increasing above those of non-Indigenous students. Nothing in particular was done to achieve this, something just changed in the classroom and it happened organically.’’

The AAP trial ended this week with all nine schools showcasing their learnings in a gallery display, attended by the Minister, Executive Board and other interested schools and stakeholders.

Following the positive impact this program has had in pilot schools across such a short time, the AAP program will be gradually implemented in Transition classes across the NT over three years starting from Semester 1 2018. 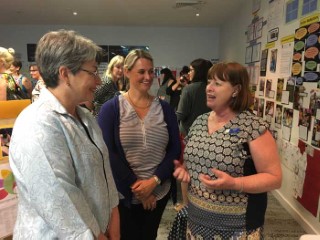